Even with the current level of diversity within Oregon's nursery and greenhouse industry, the majority of the states production is located in the five Northern Willamette Valley counties - Clackamas, Marion, Washington, Yamhill, and Multnomah. The chart below shows sales figures for 2007, provided by the NASS-National Agricultural Statistics Service. These figures do not include data from the cut Christmas tree industry. 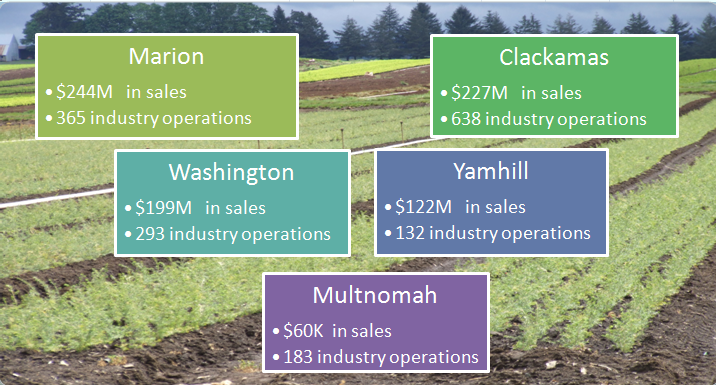 These five counties represent 84 percent of the total value of nursery and greenhouse production for Oregon. The major factors that distinguish these counties from other locations include moderate climate, quality soils and water, and good access to transportation and the interstate.

However, other regions of Oregon have outstanding nurseries as well. Some regions offer outstanding climatic conditions especially well suited for some unique or speciality crops. Many of these main areas include parts of Eastern Oregon, along the coastline, and in the valleys of Southern Oregon.