It is difficult to determine whether a plant is infected with Phytophthora. Other factors—such as other plant pathogens, or drought or sunburn—can cause plant damage that looks like Phytophthora symptoms. 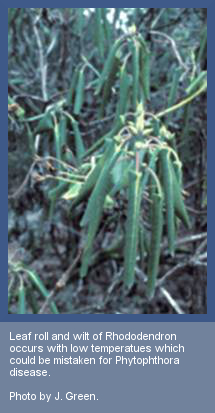 It is impossible to tell which species of Phytophthora are present based solely on plant symptoms. A correct diagnosis can be made only with the help of professional plant pathologists and laboratories.

In the field or greenhouse, you can begin the process of diagnosis by: 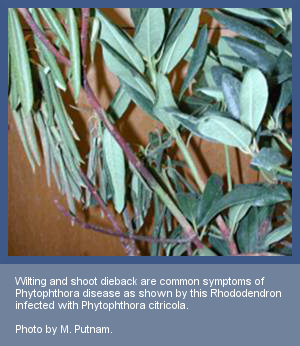 Symptoms are an indication of disease by reaction of the host, such as changes in the plant’s growth or appearance. For example, the symptom of leaf spots on Rhododendron can be caused by various fungi, sunburn, too much fertilizer—or by Phytophthora.

Signs are an indication of disease from direct observation of a pathogen, insect, or their parts. Signs can include fungal fruiting bodies, bacterial slime, or the presence of insects or mites. Remember that signs of a Phytophthora infection, such as spores, are not visible to the naked eye, but signs of other factors that damage plants often can be seen.

Determine what the plant should look like at this time of year. For example, a typical Rhododendron generally has large, flat, leathery, dark green leaves that are held out from the stem to intercept sunlight.

Next, examine the entire plant and surrounding plants, and determine what parts of the plant are affected.

Describe what the plant actually looks like; use symptoms and signs in your description. For example, leaves may be rolled, drooping down, and appear “off color” or a faded green. Wilting such as this may be due to rotted roots, a girdled trunk, or lack of water. A good examination of the diseased plant will help focus your attention on the most important area(s). Also look for other indications of the cause(s) of the damage; for example, mechanical damage, chemical residues, and records of extreme weather. 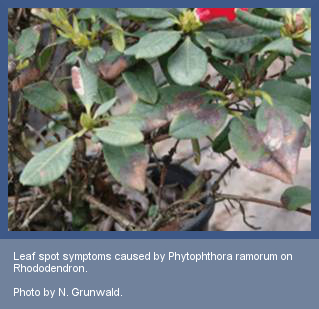 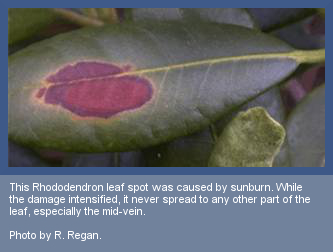 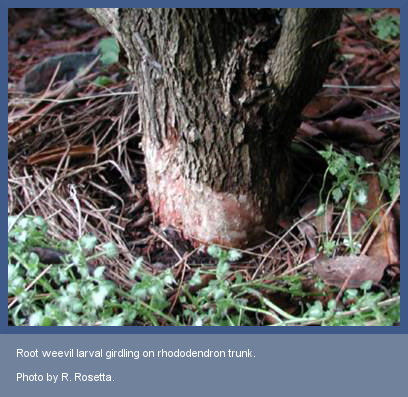 Aboveground symptoms are useful but not completely diagnostic. Many different problems can result in the same aboveground symptoms as Phytophthora root rots. For example, anything that girdles or cuts off water and nutrients to the top of a plant results in wilting, leaf chlorosis (yellowing), leaf necrosis (browning), and premature leaf fall and plant death. Causes of girdling can include feeding by root weevil larvae, winter injury, mechanical injury, wire or plastic used to keep trees straight after planting, nursery tags, lack of water, and fungal root rots as well as Phytophthora root rot.

Many plants with Phytophthora root rot do not show aboveground symptoms until summer. As hot, dry weather sets in, the plant does not have enough functional roots left to keep up with transpiration. Plants frequently wilt and collapse within a week. Because of the wilting, many people water plants even more than usual, flooding their roots, encouraging the pathogen, and potentially spreading the disease even more.

Belowground symptoms of Phytophthora root rot include the plant’s having few, if any, feeder roots while the remaining roots are dark and in some stage of decay. Symptoms will be most severe at the root tips and least severe near the crown. Decaying roots are generally due to other microorganisms’ feeding on the roots after being killed by Phytophthora. There are some exceptions, which will be discussed shortly. 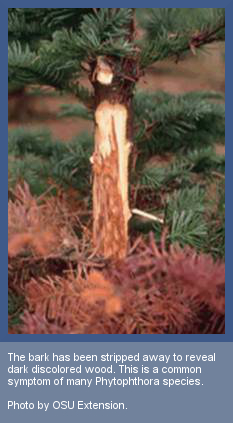 Near the advancing margin of a Phytophthora-infected root, the roots generally are firm. Use a pocketknife on larger roots (fingernails are okay on smaller roots) to expose the vascular cambium. The area between the bark (phloem) and inner wood (xylem) is highly discolored where the Phytophthora organism has been actively colonizing the root or crown. Many times, the cambium is a dull red to reddish brown. Above this area, the cambium will be the normal color for the plant, generally some shade of white to light green. The transition between the discolored area and the healthy area may be sharp, with a distinctive margin.

Phytophthora root rots generally start low and work up the plant. Exceptions include: 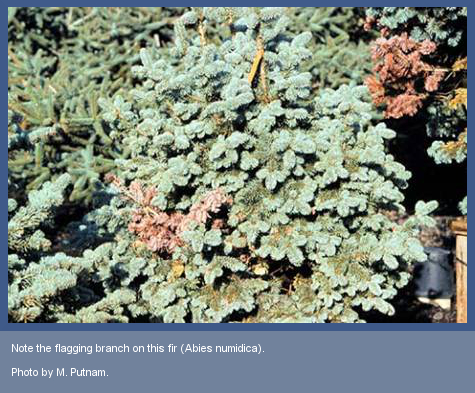 Symptoms of Phytophthora diseases are not restricted to root rots, because some species attack only aboveground parts of the plant. Large, necrotic leaf or stem blotches characterize late blight of potato and tomato. Under the leaf, along the leading edge of the necrotic tissue, a downy, white growth may develop. Defoliation and a dieback starting at branch tips characterize holly tip blight. Rhododendrons develop a leaf spot and blight in winter caused by Phytophthora syringae.

Crabapple nursery stock can develop a black, sunken canker several inches above the soil due to the same pathogen.

Phytophthora ramorum causes different symptoms on different hosts but this will be covered in Module 3.

Look for Uniform and Nonuniform Patterns of Damage

Nonuniform, or random, damage to plants suggests that a living factor, such as Phytophthora, is responsible. Nonuniform damage can show up as:

Pay close attention to production areas where water stands for long periods or where drainage is poor. Remember that Phytophthora thrives best in those areas. 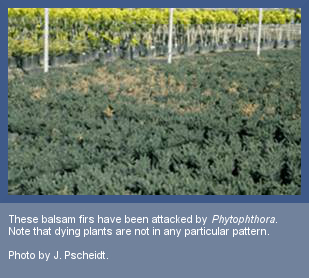 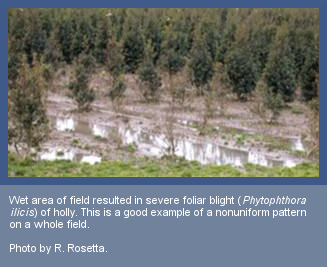 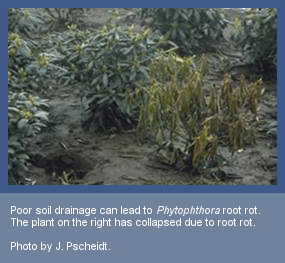 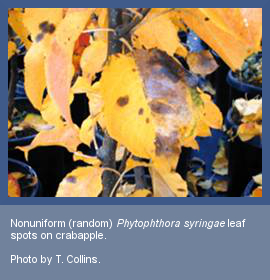 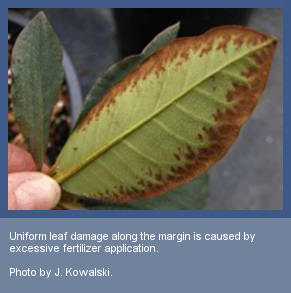 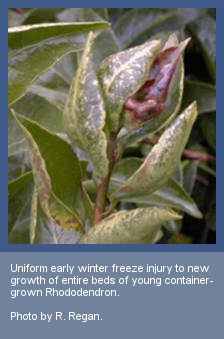 Determine the Timeline of Damage Development

Damage that spreads over time from plant to plant or from one part of a plant to another part indicates the cause is a living organism, such as Phytophthora.

Living organisms generally multiply with time; thus, damage increases and spreads. This progressive damage can occur within a few days or can take several months or even years.

Damage that does not spread, or damage that has a clear, straight boundary between it and undamaged plant tissue, suggests a nonliving factor. 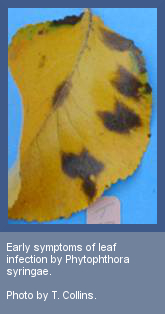 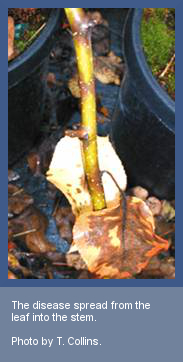 Using the Rhododendron example, you determined that you have wilting, off-color leaves on plants with sound trunks but with rotted, brown roots that are sitting in moist soil. No insect adults or larvae could be found. Further, most wilting plants are in a group at the bottom of a hill where water collects. Also, a few wilted plants were found randomly outside the main group, especially in the last week. Plants that initially looked fine have also begun to wilt.

The Rhododendron plants are not normal and have symptoms of root rot. The pattern indicates a living organism is involved, as does the fact that more plants are showing symptoms. Moist soil indicates there is plenty of water. A sound trunk without injury around the root crown or collar indicates the problems may not be due to root weevil larvae. Based on symptoms, the pattern in the field, and the fact that affected plants are getting worse, we make a preliminary diagnosis of Phytophthora root rot.