The Cabbage White Butterfly can cause damage to several cole crops in the Willamette Valley. This page provides some basic information about the pest and discusses management and controls methods. Detailed scouting and monitoring techniques are provided as well as a risk assessment for spray decisions.

The Imported Cabbage worm is also known as the cabbage white butterfly (see adult picture below). You are familiar with this common insect in your garden or on your farm. It associates with broccoli, cauliflower, and other cabbage family plants. It is a minor pest in the home garden and is easily controlled by an application of products containing Bacillus thuringiensis (Bt). In the home garden, if you harvest a head of broccoli with a worm in it, you simply pick out the worm. In a commercial farming setting, this insect can be a serious problem.


The larvae, commonly known as “green worms,” crawl up into the developing broccoli head where they contaminate the harvested broccoli (see larvae picture below). It is impossible to get the worms out of the broccoli in the processing plant. And, the typical consumer has very low tolerance for worms in their frozen vegetables. If a load of harvested broccoli arrives at the processing plant and is found to be contaminated with green worms, the entire load is rejected. This costs the farmer thousands of dollars in losses. 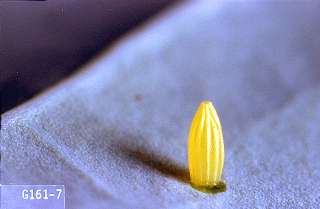 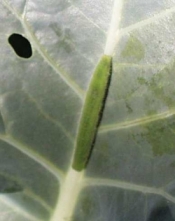 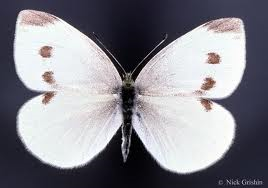 How to ID Pest


Adults are white with several black markings on the wings with a wingspan of about 45 mm. They may be seen flying about in the field from early spring to late fall. Larvae are velvety-green with a faint yellow dorsal stripe and a row of yellow spots running laterally along the body. Mature larvae are about 30 mm long. Eggs are oblong, white to cream colored, but eventually turns yellowish. The egg is laid on it's end on the underside of leaves. The shape of the egg is sometimes described as resembling a football (see egg picture above).


This pest overwinters in the pupal stage on host plants. Adults emerge in mid-Spring and lay eggs singly on the undersides of outer leaves. Eggs hatch in 4 to 8 days and larvae mature in two to three weeks, then pupate on the host plant. The development from egg to adult requires 3 to 6 weeks. Adults emerge in one to two weeks, mate, and lay eggs for another generation. There are 3 to 5 generations each year.

This insect pest feeds on all Cole crops (cabbage family plants), but it prefers broccoli, cabbage and cauliflower. The larvae make round holes in leaves, usually on the outside leaves. Damage to cauliflower and broccoli is caused by the excrement which discolors the heads. When heads develop, cabbageworms feed on the outer leaves and bore into the center, making the crop unmarketable for fresh market. For processing crops (frozen mixed vegetables) it is a different story. The damage to the leaves may be insignificant. The worm contaminates the frozen broccoli. Again, consumers have a very low tolerance for worms in their frozen vegetables. The quality assurance standards for processed broccoli and cauliflower are very high.

Begin to scout the crop at the button stage, just before the broccoli or cauliflower bud begins to expand and elongate. Check for presence of small larvae or eggs on the undersides of leaves. Pull sets of 10 leaves per set from 10 different spots in the field, for a total of 100 leaves. Inspect for the presence of larvae and the presence of greenish-brown fecal pellets. Check the crop again at weekly intervals until harvest. If there are no worms detected at the button stage, a single clean up spray should be applied 7-10 days prior to harvest. Generally, a no-spray program is not reccomended. The quality standards are too high and risk of significant financial loss is too great. A single “clean up” spray just prior to harvest is justified because discovery of potential insect contaminants at low levels if difficult.


If you find, on average, two or more medium sized green worms per ten leaves (20% leaf contamination) at the button stage, a two-spray program is needed. Apply the first spray at the button stage. Apply a second spray (the “clean up” spray) 7-10 days prior to harvest. A one spray program where the single spray is applied at the button stage is not recommended. These recommendations are very conservative and they are not exact. They are based on field experience. One day, we are going to have to hire a graduate student to refine an action threshold. It is complicated by the fact that there are up to five different insects that contaminate broccoli. When things get complicated, it is recommneded to be conservative.

The adult of this pest is not attracted by a pheromone; therefore, scouting of the adult is done by scanning the field from a fixed point for two minutes and counting the number of cabbage white butterflies that are flying in the air. Figure Four is a graph of cabbage white butterfly counts for 2011 and a ten year average. You can see the multiple overlapping flights. In a normal year, counts peak at about five (5) butterflies per two minutes of observation. In an outbreak year, counts peak as high as twenty five (25) butterflies per two minutes of observation. This insect really gives you a clear idea of how insect populations vary from year to year. In a low year, there are hardly any butterflies above the broccoli and cauliflower fields. In an outbreak there are so many butterflies it is like a summer snow storm. 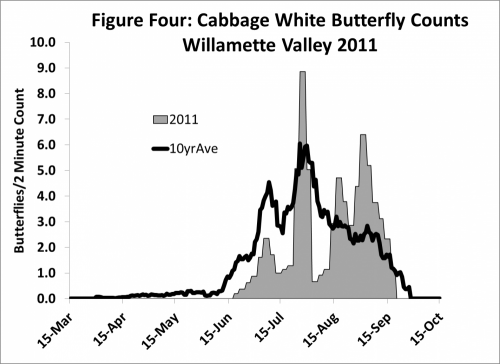 
Biological Control: The imported cabbageworm population may be suppressed by natural enemies and virus diseases. Btk (Bacillus thuringiensis kurstaki) can effectively controls this pest, but it must be applied about every seven days beginning after the larvae first appear. In general, Bt works best on small larvae. Since the leaf damage is relatively insignificant, Bt is generally sufficient to control cabbage butterflies in the home garden. In a commercial setting, Bt is useful when applied in a multiple spray program to slow the development of insecticide resistance.


Chemical Control: Insecticides are commonly used to control this pest, but must be selected carefully and used only when necessary. Please consult the PNW Insect Management Handbook for pesticide recommendations. 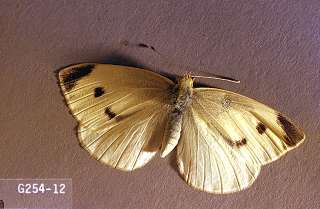