White Mold of Snap Bean and Other Vegetable Crops

White mold is a serious foliar and pod disease of snap beans grown for processing in western Oregon as well as in all major snap bean production regions in the US. White mold has a wide host range as it is a pathogen on more than 400 plant species. Vegetable farmers grow many crops that are hosts to white mold, including carrots, peppers, tomatoes, potatoes, cabbage, squash, lettuce, beans, peas, and parsley (visit White Mold Photo Gallery to view symptoms on many crops).  Because the host range is so wide, diversified vegetable farmers can build up white mold inoculum over the years.

The pathogen that causes white mold is Sclerotinia sclerotiorum (Ss). This pathogen causes a single cycle disease initiated by soilborne survival structures called sclerotia (Fig. 1). Sclerotia can survive in soil for up to 8 years. New infections occur in beans when sclerotia near the soil surface germinate under the bean canopy and form apothecia (mushroom-like structures that disseminate spores, Fig. 2). Each apothecium produces millions of ascospores which infect bean flowers; the disease then spreads to stems and pods. In other crops, such as cabbage family crops, peppers, celery, and lettuce, the sclerotia can also germinate directly (without producing apothecia) and infect the host plant at or just below the soil surface. The fungus then grows throughout the plant. White mold can develop on the fruits of beans (Fig. 3), winter squash, peppers, and tomatoes.

For a more complete description of the pathogen and life cycle, refer to Heffer-Link and Johnson's 2007 American Phytopathological Society article.

Chemical control:  For chemical control recommendations for the Pacific Northwest of the US, consult the PNW Disease Handbook recommendations for snap bean white mold management (Ocamb and Ghent) and snap bean white mold and gray mold management (Ocamb and McReynolds).Organic (and conventional) farmers can apply Contans, a biofungicide (Coniothyrium minitans), to reduce white mold inoculum density. For more complete information on Contans and Coniothyrium minitans, consult the What is Contans? article at oregonvegetables.com.

White mold is a serious disease on snap beans as well as other processed vegetable crops grown in rotation with beans: squash, peppers, peas, cauliflower and broccoli. In addition, processed vegetable farmers grow cover crops including peas and clovers which may be white mold hosts.  These white mold susceptible crops are grown in rotation with the non-hosts sweet corn and wheat, small grain cover crops, and annual and perennial grass seed crops.

Fresh market vegetable farmers grow many crops that are hosts to white mold, including carrots, peppers, potatoes, cabbage family crops, squash, lettuce, beans, and peas.  In addition, farmers grow cover crop hosts including peas and clovers.  Because the host range is so wide, farmers growing a diversity of crop species find it difficult to rotate out of host crops for the 3 to 4 years required to reduce inoculum levels.

Rotation out of a host crop for one or two seasons, when combined with biological control and reduced tillage, could reduce white mold risk. Both fresh market and processed vegetable growers could rotate white mold susceptible crops with non-hosts such as sweet corn, small grains (wheat, oats), grass seed, grass family cover crops, or sod, along with other inoculum destruction strategies to knock down inoculum populations and reduce white mold risk.

Crop Canopy and Moisture Management:  White mold is favored by a dense, closed canopy. Keeping plant surfaces dry reduces disease risk.  Apothecia form and release spores into the canopy when soils are continuously moist. Successful infection of plant tissue requires a continuous leaf wetness period of 16 to 48 hours at 54 to 74°F. Wider row spacing and row orientation with the prevailing winds can help keep plants and the soil surface drier. Avoid over-fertilization with nitrogen as that increases canopy size.

Resistant germplasm: There are no commercially available snap bean cultivars with resistance to white mold.  It has been difficult to breed for resistance because genetic control is quantitative.  Five major sources of resistance have been identified and mapped. OSU has made most progress in this area with its bean lines (6230 & 6235) resulting from crossing NY6020 B8 snap beans (with resistance) with the western Bush Blue Lake snap bean type (susceptible).  Because this resistance is not strong enough as a stand-alone strategy under high disease pressure, these varieties should be adopted in combination with other strategies.

Reduced tillage: Sclerotia have been reported to lose viability most rapidly in the top few inches of soil, particularly in soils of high microbial activity; sclerotia buried at lower depths can survive for many years.  Reduced tillage strategies minimize soil disturbance that would result in deep burial. Direct-drilling grass seed, wheat, or cover crops into standing bean residues would also keep sclerotia at or near the soil surface. Cover crops could also be spun on over standing crop residues. These practices, which would leave sclerotia on or near the soil surface for 7 months to several years, may have potential to reduce sclerotial viability.  Alternatively, sclerotia could be left on or near the soil surface by simply leaving crop residues in place without planting a winter crop or cover crop, as is typical for fall crucifers such as cauliflower, broccoli, and kale.  Some pathologists recommend burying sclerotia deeply, and that does reduce disease risk as long as those sclerotia remain at depth. However, those sclerotia will live longer than if left closer to the surface and can cause disease (potentially many years later) if brought up in a subsequent tillage event. 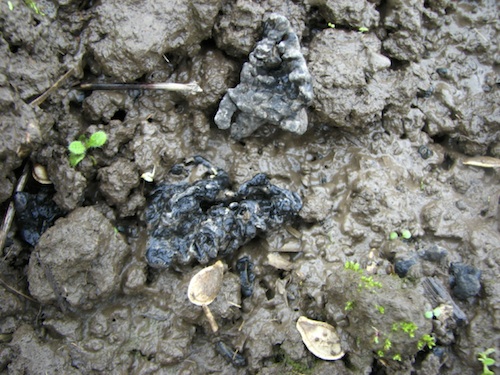 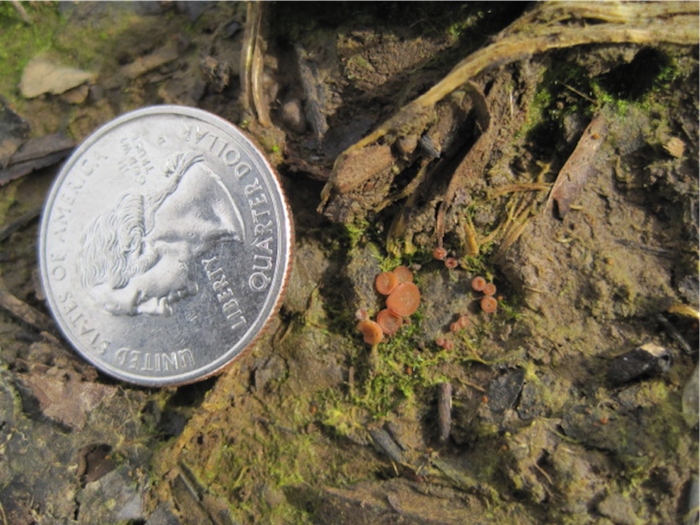 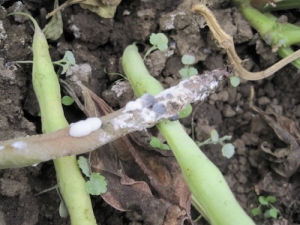 This development of this article was supported by grants from the USDA NIFA programs Western SARE and Western Region IPM.