The first goal of this trial was to evaluate the effects of timing and number of applications on control of anthracnose (Colletotrichum cereale) on an annual bluegrass putting green.

A second goal of this trial was to determine the minimum number of applications necessary to produce acceptable turf quality.

The site is a sand based chipping green located near the 10th tee. Greens at the course have a history of anthracnose problems and fungal resistance to strobilurin and thiophanate methyl fungicides documented by Dr. Frank Wong at the Turf Pathology Laboratory at University of California at Riverside in 2006.

The individual plots measured 25 square feet (5 X 5). The products were applied with a CO2-powered sprayer using TeeJet 80015 nozzles at 30 psi producing a total spray volume of 2 gallons per 1,000 square feet.

The green was mowed daily at 0.125 inches and occasionally lower using a triplex greens mower. Before the trial started, the green had been fertilized every two weeks at 0.25 lbs nitrogen per 1,000 square feet. As a result, the green was very healthy when the trial began. After the initiation of the trial, fertilizer applications were withheld until the first week of August to encourage disease activity. Fertilizer applications were then resumed on the same schedule as the other golf course putting greens. Irrigation was applied regularly with a RainBird irrigation system with supplemental hand watering as needed. Light sand topdressing was applied every other week during the trial.

Disease activity ratings and plot quality ratings were made on the same dates as the fungicide applications. A final rating was made on October 1st , a couple of days before fall coring. Data from each rating date were subjected to analysis of variance using a randomized complete block design with 3 replications. Differences between means were determined by LSD at the 5% level.

*All rates are in oz product per 1,000 sq ft.
Notes: Lynx is an experimental DMI which is awaiting approval from the EPA. Strobilurin and thiophanate methyl based fungicides were not used in the rotations because of known resistance problems at this site. Results and Discussion

Since Emerald Valley Golf Club has an annual problem with Anthracnose, we know that symptoms typically appear around middle to late July. One approach to preventative treatments has been to treat 4 weeks before first symptom appearance. In this trial, our early start date was consistent with this approach. As it turned out, early symptoms were observed by mid July.

Programs 1 & 2 had very close to 0 percent disease. Even though Program 3 did not perform as well, the difference in control between Programs 1, 2 & 3 was not statistically different.

Given the expectations for playing conditions at most golf courses, it is our opinion that only the early start rotations produced acceptable disease control in this trial.

Early start rotation programs produced the least amount of disease and the highest turf quality ratings in this trial.

The success of rotation program 1 caused us to question the necessity of continuing applications after the middle of August if 3 timely applications are made in June, July, & August.

The results of program 4 (late start with 3 apps) indicate that if you are late with the first application, then additional late season applications are needed to avoid severe disease and poor turf quality.

These results may be explained as follows: If you let the disease develop a critical mass, subsequent applications are only holding it at bay and treatments will be needed clear into September just to avoid severe turf loss. However, if you treat the disease early enough, the disease never gains the critical mass to cause turf damage and late season applications may not be necessary.

Note: ratings between programs with differences greater than the LSD are statistically different.

Note: ratings between programs with differences greater than the LSD are statistically different. 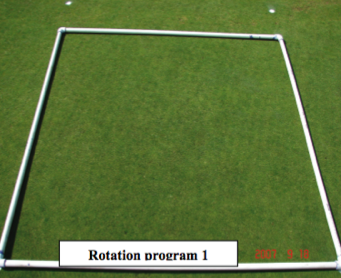